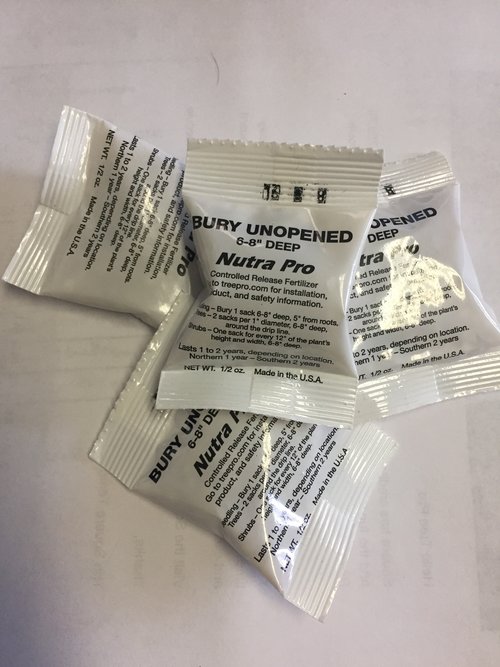 Use one pack per plant for most perennials, newly planted trees and shrubs and bedding plants or 1 to 2 packets for larger shrubs and trees. The balanced, controlled release fertilizer is complimented with Bio stimulants that assist the plant with nutrients. The increased root mass created by this planting treatment has been shown to produce a dramatic improvement in survival and plant vigor in the fifth year after treatment. Benefits: Improved survival, greater root development and better mycorrhizal infection resulting from greater root mass. Greater drought resistance associated with increased mycorrhizal infection.

Using time-release fertilizer is like taking a vitamin tablet. If we always ate a perfect, well-balanced diet, we wouldn't need it. Unfortunately, few of us eat as we should. As a result, if we didn't supplement our diet, we would be deficient in certain vitamins and minerals

By the same token, when fertilizer is broadcast around trees, there's no way to know how much of it reaches the trees' roots. Using Nutrapro solves this problem because it's placed in the hole alongside the tree's roots.

Nutra Pro has been specially formulated for trees and shrubs (16-8-8). It comes in a plastic package with micro-pores that allow the fertilizer to be released into the soil at a controlled rate (as moisture transfers thru the pores). The contents (NPK) are dissolved over time by water vapor entering the package through these micro-pores.

One package supplies key nutrients for one to two years. During this period trees generally experience an increase in growth rate by up to 25 percent.

Nutra Pro eliminates the danger of burning the roots of young trees. Best of all, it doesn't contaminate ground water and requires no measuring, mixing or clean-up. Purchased in multiples of 5, 25. 100 and 1000 packs.