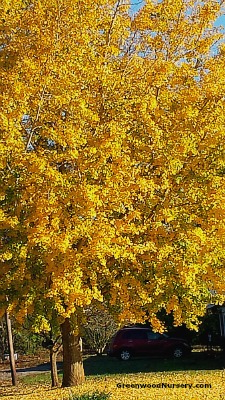 Ginkgo Biloba Maidenhair Tree is considered to be a living fossil.

Native to China, the Ginkgo Biloba Tree was brought to the United States in the 1700's. Sometimes spelled Gingko Biloba, this flowering tree can live as long as 3000 years. The Ginkgo tree leaves are fan shaped resembling those of maidenhair ferns. Starting out green in spring, they change over to striking bright yellow fall foliage.

Ginkgo Biloba grows in the 50 to 80 foot tall range with a spread of between 25 and 40 feet wide. This is a free shaped tree growing without the balanced branching structure found in other large growing trees. Ginkgo is often grown for herbal products and Japanese bonsai.

Ginkgo Biloba ships is available as: