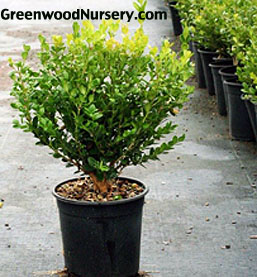 Winter Gem is considered the classic evergreen boxwood hedge plant in the 2-3 foot hedge range. When you think about defining or separating areas in the garden this is the boxwood hedging will be your first choice. Buxus microphylla Winter Gem, can be used to hide a heat pump, as foundation plants and is especially pretty against red brick homes. When used as a foundation plant it becomes beautiful background foliage for other colorful plant varieties.

Note: the image on this page is of an older end of season one gallon winter gem boxwood. We have crops that are released for shipping at different times of year and upon release will not be full and formed like the image of plant shown here. It is the only size avaialble when adding to the site to profile the plant.

How far apart do you plant Winter Gem Boxwoods? Space your Winter Gem Boxwood plants approximately 4 feet apart. If you plan to keep them pruned to the 2 to 3 foot width range, then spacing on 2.5 foot centers will work for a continuous hedge.

This is the evergreen boxwood shrub that keeps its color over the winter months. You'll want to use color around the Boxwood Winter Gem for contrast and separation. I suggest any red berry holly shrubs for winter along with a few of the ornamental grasses. For the rest of the year any red flowering or red leaf plants make for a stunning appearance. This low growing boxwood is a good choice classic evergreen shrub for English gardens and cottage gardens.

Growing Instructions for Evergreen Winter Gem Boxwoods:
Follow a regular watering schedule during the first growing season to establish a deep, extensive root system. Feed your Boxwood Winter Gem with a general purpose fertilizer before new growth begins in spring. For a tidy and neat appearance, shear annually to shape. Watering is reduced after establishment.

How to Plant and Grow Winter Gem Boxwoods:

Boxwood Winter Gem ships in one gallon trade size containers. Note: as mentioned above in description, the image of plant is a one gallon. It is an older season plant. Top growth will often vary according to time of year when a crop is released for shipping.

Note: Does not ship to PA addresses