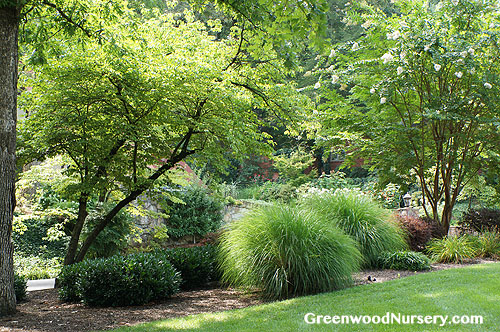 There's grass... and then there are GRASSES!

You mow the grass, but ornamental grasses get a whole different treatment. You scowl and say, "Darn it! Look how long the grass is getting!" Then smile and say, "Look at those beautiful grasses!"

There's something very special about ornamental grasses than can make a fan out of the most avid lawn-care grumbler . For one thing, they are relatively easy to grow (and hard to kill) and they can be quite spectacular without requiring a lot of expertise on the part of the homeowner. Ornamental grasses add year-long garden interest.

I found an excellent web site full of easy-to-understand information about ornamental grasses, hosted by the University of Illinois Extension. The web address is http://www.urbanext.uiuc.edu/grasses/. There's even a really neat 3 minute video about grasses that you can view!

The site reminds us of an important point: you need to understand the growth habits of grasses before you plant them. Why? Because most grasses are classified either as clump forming or rhizome forming, and they have very different characteristics!

Clump forming grasses grow in neat mounds (clumps) and work well in close proximity to perennials as they are not invasive. However, rhizome grasses spread out their underground stems and can quickly take over an entire area. That can be both desirable and attractive, but you wouldn't want to plant rhizome forming grasses around your prized perennials!

When it comes to planting grasses, you can do so in either spring, summer or fall. If you decide on fall planting, in most climates, it's best to plant in August or September, allowing the grasses to establish a solid root system before winter.

Even if you plan on spring planting, conventional wisdom suggests tilling the soil in the fall so the freeze/thaw cycle will improve workability. You won't need a whole lot of fertilizer, but for about 100 square feet, dig in about one pound of all purpose (10-10-10) fertilizer as you prepare the soil.

After you've planted your ornamental grasses, give them a good watering, and maintain a moist soil environment until they're established. If you decided on fall planting, cover your new grasses lightly with hay or straw before the first frost. Again, if you have specific planting or care questions, drop me an e-mail and I'll send you a personal reply.

A word about weed control: I suggest you mulch around your ornamental grasses as this will deter weed growth and make for easier maintenance.

My personal preference is not to cut down my grasses when they become dry and brittle in the winter, as I think they look very attractive that way, particularly when I see them rising up above the snow. I wait until the spring and trim back the foliage to about 6 inches which encourages spring growth.

Here are some of my favorite ornamental grasses:

For a basic fescue (with a 'twist') I like Beyond Blue Fescue. It really is the "bluest of the blues." As the summer progresses, long, wheat-like stems sprout from the center of the blue clump, adding a whole new dimension.

Pennisetum Little Bunny is what is known as a "super dwarf" fountain grass and works well around perennials without overpowering them. It looks good on rock gardens and is deer-resistant.

Morning Light Miscanthus seems to grow in almost any environment and is a well-behaved (non-spreading) grass. It has a distinctive cream-colored stripe down the center of its long green leaves. I think it looks very attractive as an accent near porches and patios. It's a happy grass that goes well with most everything!

Well, those are just three of my favorites. When you're planning your landscape, be sure to include some of Greenwood Nursery's ornamental grasses that you can enjoy year-round!