Preparing the Garden and Yard for Housing a Few Chickens 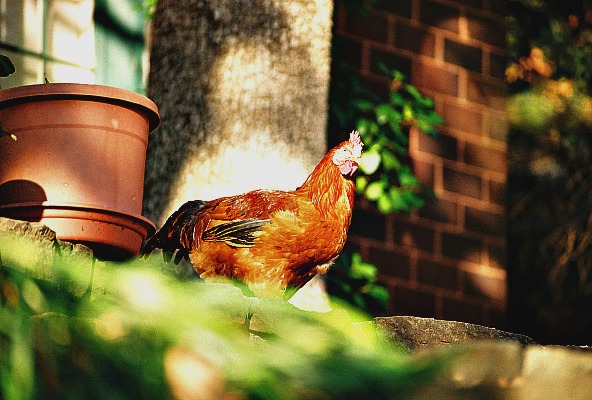 Chicken keeping, even in a typical city backyard, is becoming a very popular hobby. There’s a lot of great reasons for this from being wonderful pets to a practical and safe way to getfresh eggs, there’s many reasons people are keeping a few chickens. Chickens are perfect for even the smallest urban yard and garden, but despite all of the great things about them there are still a few very, very important considerations and preparations you need to take in order to prepare your garden or yard for housing a few chickens.


What you need to know


What harm can a cute chicken (or three) do?


Chickens are known for being bug eaters first and plant eaters second, but this isn’t really true. They eat everything with great gusto. Chickens generally turn an area that once had vegetation of most all kinds into a dusty wasteland from thick crabgrass infused turf to an established perennial bed. Release a small group of chickens into a vegetable garden and say goodbye to not only your fruiting bodies of veggies, but to all of the foliage and roots too. Any pots they can jump up and into, say goodbye to the plants (and much of the dirt in them) too. Chickens peck and devour a LOT of things, from the bugs on the plants to the plants themselves. They’ll sample and create Swiss cheese-like holes into plants they don’t like to eat but find entertainment in. They’ll scratch and destroy a bed in a matter of minutes, and some birds get into the scratching to the point that they create pretty sizeable divots and holes. They especially seem to enjoy removing the vegetation around barriers and walls, where bugs seem to take refuge along the barriers for protection. While this can make for a nice looking edge along a garden, they won’t stop there.


Chickens are also remarkable and constant um, poopers. They poop everywhere, as they walk and go about their business they poop. There are different kinds of chicken poop too. Regular chicken poop which is the kind of poop that comes out the most looks like sort of what you’d expect a bird’s poop to look like. It’s brown or green with some white urates in there. The smell of regular chicken poop that’s not concentrated  or out of control doesn’t have much of a smell and breaks down into the soil fast. It’s also sort of easy to wipe or sweep off of surfaces. But once in a while, chickens make what’s called a cecal poop. Cecal poop is a thick and sticky poop that they do every so often. It’s normal and healthy for chickens to make cecal poops. However, these poops are big, really, really stinky, and they are hard to wash or wipe and they stain. Nothing is uglier than a pretty garden statue stained from old cecal chicken poop. It’s also unsightly and unsanitary to have chicken poop on patios where you eat, in areas you play, and on common walking path areas as you can bring the poop into the house or in the car. That’s just not good.


But Chickens Have Needs!


Chickens are happy animals in a small amount of space, but the larger the space you give them to roam, the better off they’ll be. In fact, chickens do best when they’re allowed to be outside and free roaming as much as possible. They need a secure enclosure to roost in at night, but during the day, from the crack of down to sundown (and a little after sometimes) they enjoy being out in the fresh air. They’ll be healthier animals mentally and physically if they have lots of access to a wide area consistently. The larger the space you can offer them safely, the happier they’ll be.


What you need to do to Prepare


You need to make a plan that includes not only the needs of your chickens, but how they’ll fit into your lives as a family and as a household. Consider the needs of visitors as well. It’s a good idea in most cases, in typical family homes, to partition a part of your yard just for your birds. This will include a space for a coop and a space for the chicken run- or fenced area where the chickens can be outside but not have access to your entire property. This helps confine the mess and destruction to the chicken area only. If you’re set on attempting to meld your chickens and your landscape together (and it is slightly possible, with a LOT of effort), read this article on what plants are chicken proof and how to chicken proof your landscape. Click here to read about what plants are good for chickens.


The chicken coop and should be in an area that is sheltered and protected from cold winter winds, and out of open, full day sun if possible. It should be out of sight of a neighbor’s backyard dog, if there is one. It should be in an area that’s easy to see from the house at all times, and easy to access as you’ll have to do it daily or more to feed, water, and interact with your flock. You’ll need to consider how you’ll move about the coop as you may need to bring in a wheelbarrow for removing spent bedding or adding new bedding and other similar activities. Understand that where the coop and chicken run is will be devoid of vegetation in a season and may be a slight mess- which given all you get out of having a few chickens, it can be pretty forgivable. One last but not totally important consideration for a few reasons, consider where prevailing winds generally flow and think about who or what is usually downwind from your coop. If you keep your coop clean this isn’t that big of a consideration, but just in case, you don’t want to hear a neighbor complain about smells.


A lot of people dive into keeping chickens and learn all of these things afterwards- and while that isn’t necessarily a BAD way to do things, it’s not the best way. Take it from someone who’s made a mistake or three and plan ahead for the inevitable. Chickens are worth the effort!