Integrating Chickens into the Garden Area 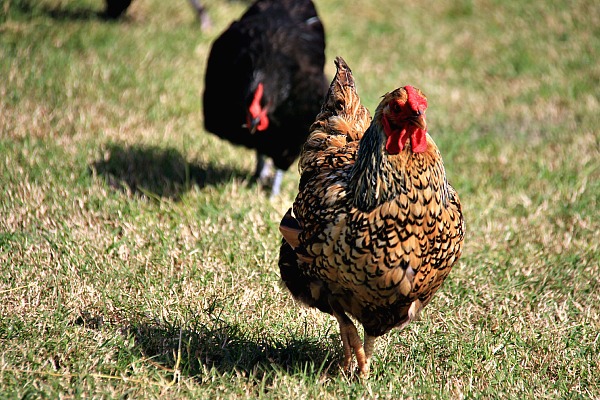 We’ve talked about the possibilities and general guidelines of gardens and chickens co-existing, in the same space. While generally this isn’t an advised situation, there are some circumstances where chickens and some kinds of gardens can co-exist happily that also benefit one another in the process. If you’re working on a plan for the spring, or for a new garden space that will include your chickens and understand what sorts of situations are appropriate for both, then you’re probably wondering how to start the whole process off. How do you plan for this sort of inclusion of both? Integrating chickens into the garden area is possible, but it’s a process and takes time. Here’s a way that’s worked for me, and I hope that in the right circumstance, it can work for others.


Just to get something clear and out of the way, chickens will absolutely devour and destroy most things. This includes anything that you find edible. This includes young, fresh growth of just about anything. Any pretty or tasty fruiting body, new tender shoot, seed, and the freshly-tilled bug happy ground it grows in will be thoroughly eaten and dug up. And, even the toughest, woodiest of plants will eventually be killed and the thickest of lawns will be turned to dust if you have a large amount of chickens held in one spot for a long enough amount of time.


I started out with a small amount of chickens and a couple of ducks in a small coop. I fenced off a small area that the birds could roam in at first, which went over nothing but scraggly and weedy turf in the back of the main area we played on our property.  I had 5 young pullets and 2 ducks at the time, which although they were enthusiastic about scratching and nibbling, their small size made it hard for them to do a lot of damage. I expanded this area as they grew, and watched what they did. They seemed to scratch up any areas against a building, against a barrier, or around rocks and other things placed on the ground, presumably where bugs and worms took shelter. They would nip at broad tender leaves and new growth, but left the thicker and older leaves and woody stems of plants alone. Rock gravel they left alone, although they did poop on it a lot and pecked between rocks. Anything I turned up they turned to dust, and they really loved kicking around mulches of most all kinds (except rock).


I took these hints, and as they grew and I added birds, I began to fence off areas where things looked like they might be at risk, and allowed my birds to access other areas of my garden that didn’t seem like they’d be at as much risk. I used 2 foot high chicken wire fencing to fence off areas and around things I didn’t want my chickens getting to- like the entire vegetable area and around new young trees, shrubs, and perennials. Especially in the spring as new growth emerges, little chicken-wire barriers were everywhere. The rock garden and the fields were all the chickens could get into.


In established areas, I’ve replaced mulches and I now use attractive stone mulches and tough barriers that separate beds. I also have planted hardier and tougher landscape plant options like evergreens, barberries, and tough ornamental grasses. I’ve moved all of the leafier items to other places where the chickens don’t have access to, where they grow on and are living in organic mulched beds.


Bear in mind that I live on a large property, and my birds (I ended up with a flock of 15) eventually had about an acre to roam freely. If you have a smaller property and/or more birds, you may not be able to get away with what I’ve been able to accomplish with plants and barriers.


The chicken coop has had a lot to do with my success - not only with how it ties into the look and feel of my landscape, but also how it functions as a happy place for the chickens to live. At first, with just a few birds, an out-of-the-box smaller coop worked perfectly. Its small size and adorable looks made it easy to have out and visible, and to move as my chickens needed more space. But as my flock grew I had to upgrade. Choosing to make your own coop that’s beautiful and functional takes planning, but it’s worth it. Keep chicken shacks out of view that aren’t attractive.


Interestingly, each bird has preferences and the flock as a whole follows the direction and preferences of certain alpha birds. This is why I started my young flock as I did and observed carefully. For example, I’ve heard that some chicken flocks ignore hostas. My birds devoured them once they discovered them.


Observe and be ready to make some fairly simple changes if you want to integrate chickens into the garden. It can be done, with careful planning and consideration. Choose a chicken coop that fits your garden style and supplies all of the basic comforts of home so that your chickens are happy birds, which will usually result in less garden damage.


We hope this helps!