Tiptoeing through the Tulips—and Other Spring Gardening Mistakes 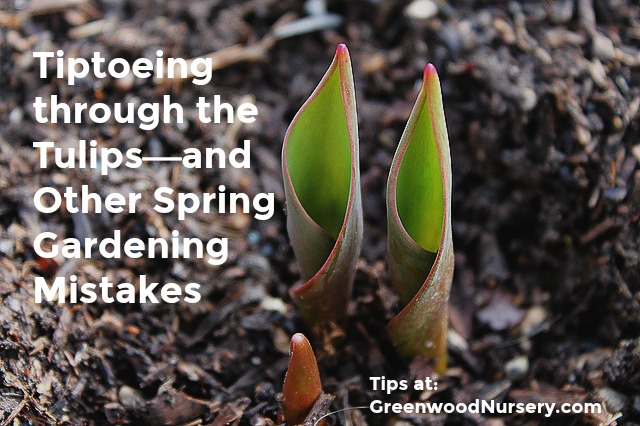 There are a few spring gardening mistakes commonly made that often inhibit the growth of bulbs and other perennials limiting their early to mid spring flower show.

Most gardeners have learned from bitter experience not to plant annuals too early in the spring, but there are plenty of errors that can be prevented to your perennials too.  One is accidental trampling, so don’t even think of tiptoeing through the tulips or lumbering through the lilies!

Granted, most perennials won’t suffer much from your stepping on them and snapping a few shoots.  They may even branch out better due to that inadvertent pruning.  But those which grow from bulbs, such as tulips or Oriental lilies, are done for the year once they get broken off.  They may even be done for good, since the bulbs derive energy for the following year from their foliage dying back after bloom.

Because lily shoots are especially fragile, you may want to place stakes in a circle around each clump as soon as its tips begin to emerge from the soil.  That will encourage both you and your pets to detour around those clumps instead of walking across them.  And be sure to allow the foliage from all your perennial bulbs to fade on its own rather than attempting to shear it off.

Speaking of the unkindest cuts, the heavy pruning which works so well for modern tea roses and other ever-bloomers can be murder for old garden roses such as gallicas and centifolias.  The heirlooms usually flower only once a year on old wood—canes produced the previous summer.  So, if all those canes are hacked back in spring, everything definitely won’t be coming up roses.

The same holds true for other shrubs which bloom on old wood, including azaleas, flowering quinces, and some hydrangea species, all of which should only be pruned shortly after they bloom.  Tea roses flower on new wood, which is why being cut to the quick doesn’t faze them.

Speaking of new growth, impatient gardeners may assume some of their perennials are dead because they aren’t making any.  But plants which don’t have to perform until mid to late summer, such as hardy hibiscuses, often like to sleep in.  You’ll want to keep track of where you placed them, so you don’t inadvertently damage them while attempting to replenish their supposedly empty spots.

And don’t be tempted to fill up those spaces rapidly with plants described as “vigorous” or “aggressive.”  They can take over your garden in double-quick time by running roughshod over everything else.  Since what is invasive varies according to climate, it’s a good idea to consult with your neighbors about which too-easy perennials have become their garden nightmares.

Probably the biggest mistake gardeners make is in assuming that all plants can be treated the same.  Like your children, they have their individual quirks.  Some enjoy lots of water; some prefer not to drink much at all.  Some can eat all the time without getting “fat;” others will become unhealthy if plied with fertilizers they don’t need.

As with raising children, you can learn some of the dos and don’ts from books, but many of them you have to pick up the hard way— through experience.  On second thought, perhaps the largest mistake really is refusing to learn from your gardening mistakes!