Planting Blackberries in Your Garden

Gardeners who scavenged for wild blackberries in their youth will be happy to hear that many modern domestic cultivars lack the wildings’ wicked thorns.  You can pick from your own patch scot-free—i.e. scratch-free!

Keep in mind that most blackberry bushes produce only nonfruiting primocanes their first year, which become berry-bearing floricanes during their second summer.  Those floricanes will die after producing (and will need to be pruned away), but the new primocanes which also have grown that season will fruit the following year.

When planting blackberries, choose a site which offers rich, well-drained, mildly acidic soil where no other berries or solanums have gone—er—grown before.  For the best results, that location should receive full sunlight and access to water - rainfall or from the hose.

Blackberries called “erect” types generally can stand on their own roots and don’t generally require a trellis.  They should be planted about 3 feet apart, with 10-foot-wide paths between their rows.

Set dormant, bareroot plants out as early in the spring as possible.  Dig holes deep enough that you can place the topmost roots on each bush 1 inch below the soil surface.  Then prune the canes back to about 6 inches above the ground.

Once your blackberry bushes have grown to 4 feet by midsummer, snip off the top 1 to 2 inches from each cane to encourage branching.  In late winter, cut all those horizontal branches back to no longer than 2 1/2 feet each.

The following year, new primocanes will emerge from the bases of the plants.  You should prune those in midsummer, as you did the previous ones after they flower and fruit, leaving the floricanes alone so that they can flower and fruit the following year.  Once you have harvested their crop, allow them to die off.  Near the end of winter, prune out all those dead canes and cut back the horizontal branches on the living canes again.

The secret to picking blackberries that are sweet rather than astringent  is to wait until the shine wears off of their shade.   In other words, choose the matte black rather than the glossy finish! Enjoy!!! 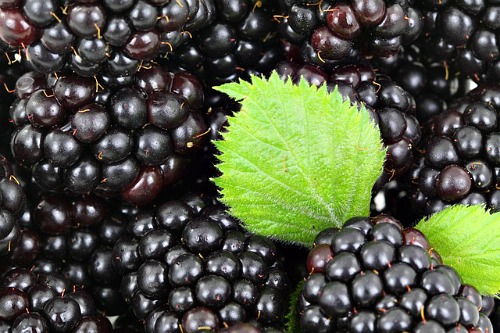