How to Plant and Grow Elderberry Plants 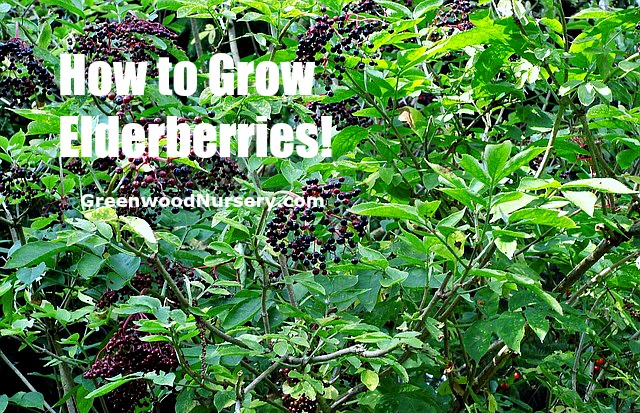 That old saw about respecting your elders should extend to elderberries (Sambucus spp.) too.  In recent years, they have gained a reputation as virus-fighters, besides being high in fiber, antioxidants and Vitamin C.
They can be toxic when uncooked, however, due to a glycoside in the seeds which is destroyed by heat.  But, if you always boil or bake the berries before consuming them in pies, jellies, and syrups, you shouldn’t find elder hostile!

You can plant dormant bushes in early spring.  If you purchase potted plants which already are growing, wait until after all threat of frost has passed before you set them in place.  It’s best to plant at least two different cultivars to ensure the best pollination.
Ideally, you should choose a location in full sun, where the soil is moist but well drained, fertile and at least slightly acidic (with a pH between 5.5 and 6.5).  Although elderberries will tolerate partial shade, less light may mean a smaller crop.  Position your bushes about 6 feet apart from each other, leaving 10 feet of space between rows.

Set the plants either at the same level they are growing in their containers, but no more than 2 inches deeper.  Water them well and mulch them with several inches of straw or shredded bark to suppress weeds and retain moisture.  The bushes should continue to receive at least 1 inch of water a week, either through rainfall or irrigation.  If weeds push their way up through the mulch, pull them by hand, since the blades of hoes or tillers can damage elderberries’ shallow roots
.
Refrain from fertilizing or pruning the bushes during their first year and snip off any clusters of white flowers that form.  That will allow the elderberries time to get established before they bear fruit.  In the second year,  prune out any dead or weak growth in late winter or early spring and apply 1 cup per bush of a 10-10-10 general fertilizer.  You should be able to harvest berries that year.
As the bushes age, prune out brittle canes which are at least three years old.  For the best fruit-bearing you don’t want your elder to be elderly!  If you prefer your bushes to maintain a vase shape, you also should remove the suckers which will spring up from the roots. You can leave them in place if you would like a hedge instead.
After flat clusters of white blooms appear in early summer, the berries will mature in late summer, turning a dark matte purple when fully ripe.  You should cover your bushes with bird netting soon after the green fruits form, to prevent your impatient feathered friends from stealing them at that stage.  Once they are fully ripe, use pruning shears or heavy–duty scissors to cut off each cluster.
You may want to freeze the clusters before you strip off the berries.  Alternatively, you can wear plastic gloves to keep from staining your pinkies purple!
Click here to buy American Black Elderberry Plants.
Short video on Making Elderberry Wine.
Share this page with
randomness