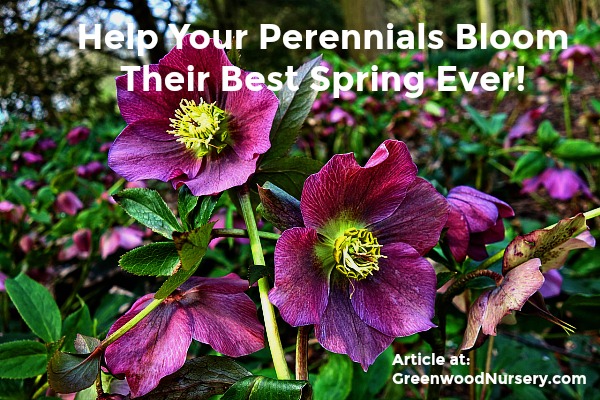 Perennial plants, like action heroes, take a beating and keep on repeating.  So they could survive  on their own if given a head start on the bad guy weeds.  But your neighbors will appreciate your grooming those plants for a less rugged look.

How much grooming they require depends on their type.  Evergreen ground covers, such as cheddar pinks and creeping phlox, often  emerge from winter looking as unconcernedly unscathed as those aforementioned action heroes.  So they may not require early pruning, but it’s a good idea to cut them back by about half after they bloom.

Some tips on how to care for perennials in spring:

More upright evergreen perennials, such as hellebores and heucheras, may get beat up and require you to snip off ragged leaves.  Since they are spring-blooming plants, however, be careful that you just are snipping foliage and not cutting off flowering stems along with it.

Herbaceous perennials die back more drastically over winter.  Some hunker down to a ground-hugging rosette of leaves.  If you didn’t prune all dead growth back to that rosette in autumn, you can do so once warmer weather arrives.  Other herbaceous types disappear completely over the coldest months, and should be cut back to the ground in spring.   Actually, “to the ground” generally means 2 to 4 inches above it.  You don’t want to muddy your pruning shears or damage any new growth which may just be emerging.

If some of your perennials have become too crowded to bloom well in summer, you can divide them in spring after they have made 2 to 4 inches of new growth.  Keep in mind, however, that irises should only be moved after they bloom and peonies only in autumn.  If possible, choose an overcast day in which to do your digging, when the ground is damp but not soggy and rain is forecast in the immediate future.

After digging up a clump of perennials  and dividing it, space the pieces at least 6 inches apart for plants which don’t grow over 2 feet tall.  Those which eventually will stand 2 to 3 feet in height should be positioned a minimum of 1 foot apart, and those which will grow even larger should have at least 1 1/2 feet of space on either side.

Although many perennials don’t need fertilizer, the hungrier ones benefit from it.  According to Horticulture’s web site, those “heavy feeders” include “mums, lupines, lilies, delphiniums, astilbes and border phloxes.”  A spring application of an organic fertilizer, in which the middle number is highest, should encourage flowering rather than excessive growth.

If you apply new mulch then, place it so that it surrounds your plants  rather than covering their crowns.   Some perennials—such as peonies—won’t bloom if they “get in too deep.”

Speaking of peonies, you’ll want their support rings in place in advance, so that the plants can grow upward through them rather than having to be crammed into them later.  It’s also best to stake tall plants early rather than trying to pick them up after they have bit the dust, which a horticultural hero never should  have to do!