The best ground cover for under your maple tree.

Is there a spreading bare spot beneath your maple tree?  Like a stunning but spoiled diva, a maple often hogs the sun’s spotlight while gobbling up much of the soil’s nutrients and moisture for itself.

That explains why most lawn grasses won’t thrive beneath your tree.  What you really need for such conditions are easy-going understudy—er, understory—plants which don’t demand top billing.  Such grounded types can tolerate the difficult conditions in the shade of your leading lady.

Vinca (Vinca minor) twinkles with periwinkle blue flowers which appear in profusion against shiny foliage in spring.  It should receive at least partial sun if you want it to bloom, but will grow with flowerless equanimity in shade, rarely surpassing a foot in height.  Consider Vinca minor ‘Ralph Shugert’ if you’d prefer a 6-inch-high variegated groundcover with smaller blooms.

Carpet bugle (Ajuga reptans) toots its own horn with spikes of blue flowers in spring and early summer.  Standing 6 inches tall and spreading by runners, deer-resistant bugle comes in colorful cultivars such as the almost-black ‘Mahogany’ and the burgundy and white-splashed ‘Burgundy Glow.’

Wintercreeper (Euonymus fortunei) should suit ivy lovers since it creeps via aerial roots as ivy does,  sometimes making inconspicuous green-tinged white blooms in early summer.  Its height will depend on whether it is climbing or crawling.  ‘Kewensis’ is valued for small leaves and ‘Coloratus’ for foliage which purples in winter.

Arborvitae fern (Selaginella braunii) actually isn’t a fern, but can play one in your landscape.  It should suit gardeners who prefer a more feathery plant than those already mentioned.  Spreading by rhizomes, it may reach 18 inches in height with green foliage which warms to copper or bronze in autumn.

Japanese tassel fern (Polystichum polyblepharum) really is a fern, its curled tips in spring sometimes resembling the knotted tufts for which it is named.  It will contribute to a woodland look with evergreen lacy fronds up to 2 feet tall.

Dwarf mondo grass (Ophiopogon japonicus ‘Nana’) should work mondo well for those of you who still prefer to see grass beneath your trees—even if in clumps rather than shorn turf.  Nana’s clumps top off at 6 inches with their lavender summer blooms and blue berries often partially or completely hidden beneath the foliage.

Sedge (Carex spp.) also has a grassy look, the groundcover types seldom growing taller than 1 foot with inconspicuous green or brown flower spikes in spring.  Pennsylvania sedge (Carex pensylvanica) is soft and green, while Japanese sedge (Carex hachijoensis ‘Evergold’) flashes a gold stripe up the center of each blade.

When planting groundcovers, spread compost over the area first, to make the soil richer and more moisture retentive.  Space your understory plants so that they can be positioned between—rather than on top of—the maple’s roots.  Most can be placed about 1 foot apart, though the wintercreepers should have 18 inches of space between plants and the ferns 2 feet.

Be sure to water your groundcovers every other day (depending on season and temperatures) for several weeks after you set them out, so they won’t die of thirst before they can put down roots of their own.  Also, take measures to contain their spread, since the same qualities that make such plants easy-care species can make them invasive as well. 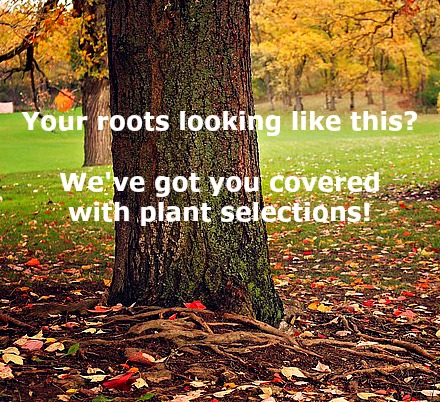