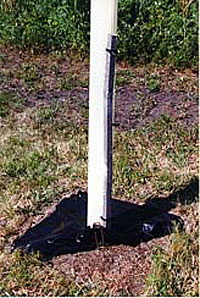 Weed Pro Weed Mats are the answer to weed control at the base of trees and shrubs. Left uncontrolled, weeds can starve out young plants. Weeds are more aggressive, more prolific and they grow faster than trees and shrubs.

Of the forces working against a successful tree planting, weed competition ranks near the top. Weed Pro Weed Mats is the non-aggressive way to control weeds.

Weeds absorb water and nutrients, robbing your trees of crucial life-sustaining elements just when they need them most. They can even outgrow your plants, thereby depriving them of much-needed sunlight.

If you fertilize without first removing weeds, you are fertilizing the weeds instead.

Herbicides are not always the best choice for weed control.  Spraying herbicide is risky business. You could damage, even destroy the trees, if your workers aren't careful. A simple shift in the wind could mean the result of dead trees. Chemical solutions are rarely the best solution.

Weed mats are environmentally friendly. They don't leach into the soil and end up in the water table. Weed Mats won't blow away in the wind and poison your neighbor's flowers.

Permeable fabric mats work well in allowing water to soak in, but after a couple days without rain, the soil beneath fabric mats tends to dry out. As a result, the permeable type of weed mat deprives trees of moisture just when they need it most.