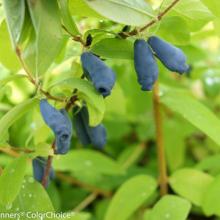 Product Rating
0
No votes yet

Berries are sweet. There’s absolutely no debate about that. But honeysuckle berries are better because they are larger, and so much easier to grow. Yes, even easier than the common blueberries that most people use as the standard of “easy” when it comes to growing any type of berries. That too we can raise no debate about.

The Sugar Mountain Blue Lonicera is part of the family of edible honeysuckles. Its fruits are larger and tastier, while the tree itself is really easy to grow and keep.

The plant, scientifically referred to as Lonicera Cerula, commonly called sweetberry honeysuckle and is Native to North America. The Sugar Mountain Blue is self fruiting though 2 varieties can be planted for heavier fruiting.

The foliage is a mass of greyish-green, while the flowers which appear in full bloom during spring are a joyous shade of white.

There’s no better plant than one which looks beautiful and produces good fruit at the same time. It’s not every day that we get a double deal for one bargain. The height of the plant is a satisfying medium range, it stands out but doesn’t stand out too much to appear abrasive in your arrangement.

On the other hand, the real plus for the edible honeysuckle is its hardy nature and the fact that it needs no special soils to grow. It thrills everywhere, be in the cold north, or the relatively warmer hinterlands.

How to take care of the Lonicera

Adaptable to most moist, well-drained soils. Water regularly, especially when first planted. Apply a controlled-release fertilizer in spring. Pruning is generally not needed, but established plants may be thinned up to 25% in late winter/early spring.

While the plant hardly needs any tending, it is still worth it to undertake a little pruning to keep it in shape. This should happen after the fruits are harvested. The tips of the branches should also be cut periodically, to allow the growth of lateral branches that bear more fruit. You should also remember to get a variety of them, just to get a variety of home-grown fruits.