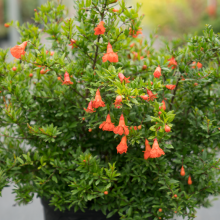 Product Rating
0
No votes yet

This is definitely the queen of the patios. The Peppy Le Pom is ranked among the best patio plants you will come across anywhere!.

The dwarf pomegranate is a piece of plant magic. Its beauty shouts loud over other flowers! In areas north of zone 7, grow this dwarf shrub in a container and relocate outdoors in late spring.

Pomegranates have been grown for centuries. They are the darlings of gardens because of their beautiful flowers, the deep green evergreen foliage, and the fruits. But the traditional pomegranate might be a little too large for the good of those with small gardens, or just pots to use. That’s just where the pumica granatum, a plant that comes from the efforts of award-winning plant breeder Megan Mathey comes in.

The Peppy Le Pom Punica is a dwarf pomegranate shrub that grows throughout the year. It blooms during the early summer, with the flowers generally present throughout the season. C, which droop beautifully like a bunch of alluring medals to form a striking balance of colors. The orange flowers and the glossy deep green leaves form a color code that is hard to miss anywhere in the garden. The flowers give way to small ornamental fruits, which are edible but come with a package of a few sour-tasting seeds in them.

In the warmer climates, you have a myriad of ways to use the dwarf pomegranate. Its presence can spark the garden, or light the patios with color. Since it doesn’t need too much care when established, you can always leave it to its beautiful ways, apart from when you believe it needs some pruning, which is rare even then.

If you have just a little space to spare, you can use the dwarf evergreen pomegranate to add some dash of color to your collection of potted plants.

If you live in a cold climate and want to grow Peppy Le Pom pomegranate in a pot outdoors for the summer, you can bring it indoors for the winter. Keep it in a cool but very bright spot all winter, out of the path of blasts of heat from radiators or air ducts, as well as blasts of cold air from exterior doors. Cut back on water compared to summer, but do not let it dry out. Don't panic if the plant drops some foliage making the transition from outdoors to in - that's normal, and they plant will replace them when conditions improve come spring.