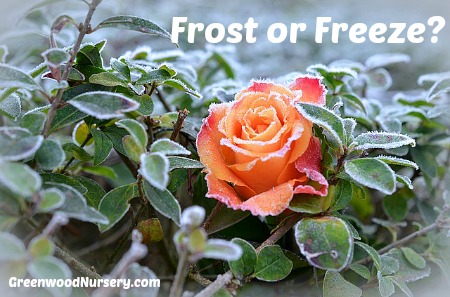 Why do we hear about frosts and freezes? Why is a frost different from a freeze? What does it mean for my garden?

There is a technical difference between a frost and a freeze, or a killing freeze as it’s called in some areas. It has everything to do with the dew point.

What happens is fairly simple - as summer begins to turn into autumn, weather patterns begin to change as well. In most of the US, the summer weather patterns allow for more humid weather. The air masses in the summer are more moisture-laden, which means the dew point is higher. And the higher the dew point, the more heat the air can hold. As the weather changes in the fall and the air masses become cooler and dryer, the dew point falls, and the air masses can get colder easier- especially at night. During the time of transition between summer into winter, air masses may be too warm to be below the freezing point throughout, but the dew point is so low that any condensation that forms overnight will naturally collect on surfaces as it does all of the time, but it will then freeze on these surfaces. This is a frost.

The air itself may not be cold enough to freeze everything through, but the water on surfaces of things can freeze. A frost is hard on plants that are tropical in origin, as well as some more tender annuals. During nights where frost is possible, it’s a good idea to bring in your tender tropical plants if you have them in containers.  Your local news will often inform you of times when you may be under a “frost advisory”. This is a good way to let you know that frost may form in your area, so it might be time to bring in, or cover your tender plants. Frosts don’t always signal the end of the growing season- in fact, some plants become more beautiful (and in some cases more flavorful!) after a frost.

What can you do to prevent frosts from damaging plants still doing their thing? Late in the night, when the frost is expected, spray the plants with water providing a good covering over the entire plant. Much of the water will remain on the plant until the next morning creating warmth so the frost is not damaging. Another way to protect plants is to cover them with old sheets, towels, pillow cases, etc.

Freezes are different. You may see information on your local news about “Freeze warnings”. A freeze warning will basically signal the end of your area’s growing season and is only ever issued during your area’s growing season. In a freeze, the air mass has a temperature below freezing. This is usually always associated with the first strong cold front of the fall season, and generally brings in the more permanent weather change for that season. This air mass will freeze all plant material that is not adapted to dealing with frozen tissues. Most vegetable crops and annual plants will not survive a hard freeze, and will die. After the first hard freeze, it’s then time to clean up the garden for the season.

There’s a lot of very interesting technical information about the different kinds of freezing and frosts. To learn more, check out this article from the University of Michigan’s Extension Service.