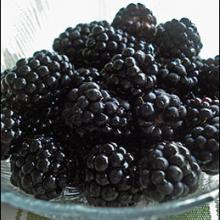 Excitement begins when the Triple Crown Blackberry bushes ripen from roughly July 10 to about August 10 in most areas. This thornless blackberry variety yields large, glossy black fruits that are firm and have the capacity to produce larger berries than any other variety that we have seen.

Agriculture research scientists tested the Triple Crown Blackberry plant for a decade before releasing it in 1996. The thornless Triple Crown Blackberry is well suited to berry farms, pick-your-own operations and backyard home gardens. It should help ensure a steady mid-summer supply of large, flavorful berries for fresh eating and storing.

The semi-erect nature of the Triple Crown Blackberry is similar to a trailing berry plantand requires trellising for optimum production. Once the canes reach about 30 inches, they begin to fall over to the ground. This plant like most trailing varieties is propagated through tip layering. It will not be as long and dense as the upright varieties which are 2 year old plants.

Begins bearing fruit in 2 years
Estimated Fruit Yield: up to 30 pounds of fruit per vine.
Zones: 5-9

I planted two of these a few

Product Rating
0
No votes yet
I planted two of these a few years ago. Compared to Apache, which is a great thornless blackberry, Triple Crown puts out at least twice the fruit, large and tasty. By the second year we were picking 1/2 gallon of berries a day from the pair. This is everything they claim.

Correction to my previous

Product Rating
0
No votes yet
Correction to my previous comment - the other variety we have is Arapaho, not Apache.

Please email us directly with any comments or concerns regarding your order.