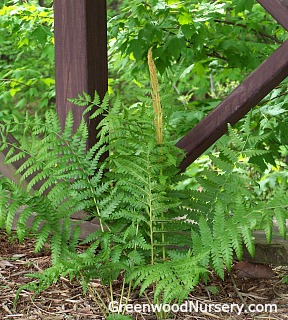 Cinnamon Ferns appear similar to Ostrich Ferns but with some distinct differences. The crosiers or young emerging fronds, of the Cinnamon Fern are white and woolly with some growing into the fertile 'cinnamon stick'. Osmunda cinnamomea spreads slowly, unlike many of the other quick growing ferns.

Best landscape use for cinnamon ferns is as background plants in large shaded gardens.

They work well with hostas or in bog gardens with ligularia, rodgersia, and other large, bold perennials.