Rooting for Raspberries - The original raspberries weren’t rude noises made by booing boors, but succulent summer fruits.  We will concentrate on the summer-bearing varieties, which produce one large crop in June or July.

Set out bareroot raspberry plants in early spring, about six weeks before your last frost.  Choose a location that has full sun and well-drained soil with a pH between 5.5 and 6.5.  Avoid areas where other berries, nightshade-family crops, or roses have grown—and make sure that wild berry bushes will keep their distance.  (Preferably a minimum 1,000 feet of distance!)  The site also should offer good air circulation, protection from wind, and at least 1 inch of rain or irrigation per week.

Soak your bushes’ roots for a couple hours—no longer than six hours—before you plant them.  Space red raspberries 2 to 3 feet apart and black raspberries 3 to 4 feet apart, leaving an 8-foot aisle between rows.   After planting the bushes, cut their canes back to within 6 inches of the ground.

Summer-bearing raspberries fruit only on second-year canes called floricanes, so they won’t make a crop their first year.   Instead they will work on producing leafy first-year canes called primocanes.  In July, cut off the top couple inches of each of those to force them to branch out.

Because black raspberries send up new shoots only from their crowns, they tend to stay in place, growing in “hills.” Red raspberries can also produce new canes from their roots, so they spread out into hedgerows, which shouldn’t be allowed to grow wider than 2 feet at ground level.  In late winter or early spring, remove the weakest canes to leave no more than five strong ones per hill or per foot of row.  Then cut their side branches back, so that those branches are no longer than 12 to 18 inches.

As the bushes produce berries during the summer, they also will produce more primocanes to be the following year’s floricanes.  Because floricanes die once they have finished fruiting, you will need to remove those dead canes the following spring as well as thinning out the living ones.

You can expect to harvest raspberries for about a month from summer-bearing bushes.  And once you taste those sun-warmed fruits, you will wonder how anyone could associate them with Bronx cheers. 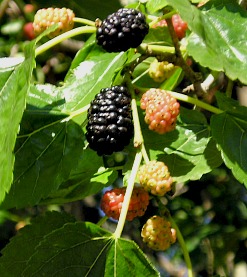