Lavender and Some of Its Uses!

“The most famous of the nose herbs” is how Louise Beebe Wilder describes lavender in her classic The Fragrant Path.  She goes on to call it “one of the cleanest and most invigorating of odors,” and we can take her word for it, as Wilder knew her nose herbs.

“Clean” is key, since lavender probably derived its name from the Latin lavare—“to wash”—and has been associated with baths since ancient times.  That could explain its supposed link with purity and chastity, and  its softly gray foliage and pale purple flowers do lend it an ethereal air of innocence.

Such a reputation may be misleading, since lavender perfume reportedly contributed to Cleopatra’s seductive allure.  And the herb once stood for “distrust” in the Language of Flowers, due to the belief that vipers sheltered beneath it.  Perhaps that belief originated with the suspicion that lavender’s beauty and fragrance—like Cleopatra’s—could cover a multitude of unpleasant truths.

To add to the confusion, since the herb was called “nard” by the Greeks, it has been associated with the scriptural spikenard.  But Bible scholars seem to agree that plant most likely was Nardostachys jatamansi instead.

Despite the “invigorating” in Wilder’s description, lavender now is much recommended for its ability to calm the nerves and promote sleep.  Housekeepers once kept sheets “laid up in lavender” to ensure their smelling fresh, and—by so doing—may have kept families feeling fresh too.

Speaking of such equilibrium—or the lack thereof!—few of us would admit to becoming overwrought or “having the vapors” these days.  However,  those feeling “stressed out” and “light-headed” instead may want to try the old remedy of dabbing their temples with lavender “water” (cologne).

Although the fragrance is reputed to soothe even such savage beasts a lions and tigers, you shouldn’t put too much store in that, as an un-soothed big cat could be seriously savage.   But the scent might, indeed, help lull your  tots into dreamland on days when they have been particularly beastly. 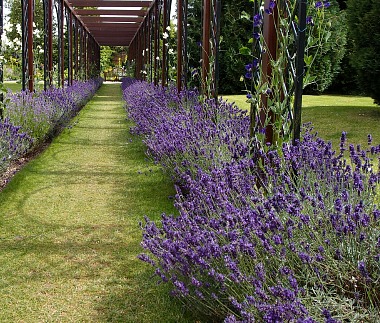