Bring Vivid Foliage to Your Garden With Heucheras 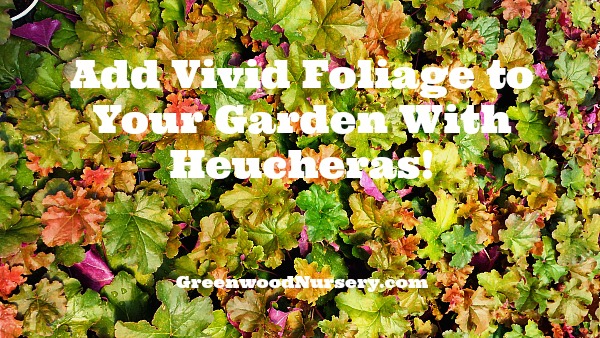 Looking for an evergreen perennial that can work almost anywhere in your garden, and looks great whether it's in bloom or not? Look no further than Heucheras!

Heucheras are commonly called Coral Bells, after their bell-like flowers, but the plants are known best for their interestingly-shaped foliage in increasingly varied and vivid color options. Better yet, they're evergreen perennials, so those leaves often stay lovely all year long.

Heuchera varieties typically spread about 1-2 feet wide, growing in rounded mounds reaching anywhere from 5 to 10 inches tall. In late spring and summer, they bloom with small flowers on thin stems that grow tall above the foliage. (And hummingbirds love the flowers!)

The stars of Heucheras are their foliage. The leaves are lobed and usually about as wide as they are long, but the colors vary widely, and new color varieties are being developed all the time.

Traditional Heuchera foliage is a pretty green, but other options include shades of red, gold, purple, and even black. Some varieties feature veining in a different, darker color than the leaves themselves, providing a striking contrast.

How to Grow Heucheras

An easy-to-grow native perennial, Heucheras are typically hardy in Zones 4 through 8 or 9. Some varieties are more sensitive to winter weather than others and prone to root heaving; a thick layer of mulch after the ground freezes can help protect them.

Heuchera does best with some shade, but some varieties can tolerate full sun as well. Woodland gardens or other shady spots are perfect places for a Heuchera. If you do plant one in full sun, be sure to keep it well-watered to help prevent the leaves from scorching, and be prepared for the color to fade a little from the sun. Plants in drier climates can also benefit from extra watering.

Wherever you plant Heucheras, the soil should be well-drained, as soggy soil can cause crown rotting. The plants usually prefer soil that is neutral or slightly acidic, though some can be grown in alkaline soils as well.

After the plants are done flowering for the season, cut back the stalks to divert energy into the leaves. Divide Heucheras every 3-5 years to keep them at their best.

The Obsidian Heuchera is the darkest heuchera variety created thus far, with leaves that are a shiny black. This award-winning plant looks best planted in mass groupings that take advantage of its unique appearance.

Silver Scrolls, as its name implies, has pale silver leaves. New growth starts off burgundy, and changes to silver with reddish-purple veins as it matures. The contrast of the darker veins with the silver leaves give this variety a striking look.

The Buttered Rum variety features large leaves that are maple-like in shape and a warm, coppery caramel color. In autumn, the leaves of this variety turn a vivid red.

One of the most popular Heuchera varieties, Plum Pudding features large, rounded leaves in a shiny, reddish-purple color. The leaves have darker purple veins, offering a subtle contrast.