Bring Hummingbirds to Your Garden With These 7 Perennials 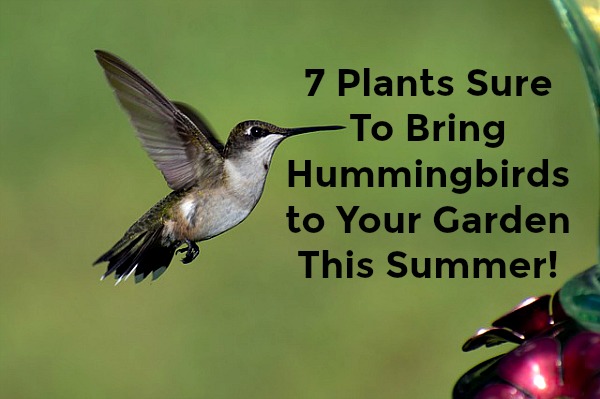 7 Plants Sure to Bring Hummingbirds to Your Garden This Summer!

Hummingbirds feed on both nectar from flowers (and from hummingbird feeders) and small insects. If you want more of these tiny, colorful, and speedy fliers in your garden next year, you can attract them with brightly colored, nectar-rich flowers. Red flowers are often said to be the most enticing for hummingbirds, but other colors can work well too.

This list of seven hummingbird-attracting perennials will get you started on growing the ultimate hummingbird garden!

Orange Trumpet Creeper is a vine native to the Southeast United States. It has deep orange, tubular-shaped flowers during the summer that hummingbirds love. In fact, the plant is also known as hummingbird vine!

This fast-growing vine does best in full sun to partial shade, and should be watered consistently throughout the first growing season. Wear protective clothing when pruning the plant in late winter, because the vine's sap can irritate skin.

Hummingbirds love salvia, and Pineapple Sage is a red salvia that keeps its color for longer than some of the other reds. The flowers are lightly pineapple scented and bloom from late spring to fall, as long as spent flowers are deadheaded regularly. It grows best in full sun or partial shade with rich soil, and should be mulched well in the winter or in cooler climates.

Butterfly bushes not only attract butterflies, but the deeper darker color flowers such as the Black Knight and Royal Red attract hummingbirds, too. This easy-to-grow perennial shrub prefers full sun or partial shade and well-drained soil.

Agastache is also known as hummingbird mint, and it's not called that for nothing! They feature long spikes of small fragrant flowers that bloom from June until September. They grow best in soil that is well-drained to dry, and are drought tolerant once established. Agastache typically grows up to 30 inches tall (depending on the variety) with a spread of up to 24 inches, and blooms most profusely in full sun.

Bee balms are another hummingbird favorite, and the Monarda Fire Ball features fragrant, showy, bright red flowers starting in mid-summer. This fast-growing perennial reaches 15 to 36 inches in height and can be grown in full sun or part shade.

Lonicera Serotina Belgica is a honeysuckle vine that does not spread aggressively like some honeysuckles. It is also known as Late Dutch Honeysuckle, and it attracts hummingbirds with its tubular flowers in mid-summer to early fall. The flower buds are a deep pink, with the flowers themselves a light pink mixed with shades of cream or light yellow.

This fast-growing vine does best in full sun or partial shade with well-drained soil. It should be deadheaded to promote blooming, and pruned after blooming to maintain its shape and control its growth.

Gelsemium rankinii, or Swamp Jessamine, is a vine with bright yellow flowers that start to bloom earlier than the others on this list, providing a food source for early-season hummingbirds.

This fast-growing vine is native to the Southeastern United States, and in the southernmost areas of its native range, it will completely fill in a fence, offering privacy. The Swamp Jessamine has two blooming periods, one in spring and one in summer, and the flowers from each are long-lasting. This perennial should be planted in full sun or partial shade

Whether you're starting from scratch or looking to add even more plants hummingbirds will love, these seven perennials will help increase your chances of bringing these fun little birds to your garden. As a next step, consider adding in a water source and places for them to perch to make your garden even more hummingbird-friendly!