Because black walnuts prefer deep, dark soil, American settlers could choose fertile sites for their homesteads by noting where such trees grew most vigorously.  Those farmers might have done better to leave the trees in place as a legacy for their descendants, since mature black walnuts can sell for prices as towering as their heights these days.

Of course, that just is timber value.  Because the trees often were planted near houses to deflect lightning strikes from those buildings, they smell of home to some people.  And that, as the ad says, is “priceless!”

Aficionados also go nuts over the strong flavor of the native black walnut, which many prefer over the more subtle taste of the “English” variety (actually an Asian species). Of course, true to its American origins, the black walnut has its ornery side too.

It likes its space and preserves that space by eventually infusing the soil around it with juglone, to discourage other plants from growing there.  Its green hulls also can stain skin and clothing brown.  And its shells are so hard that you reportedly can run a car over them, to remove their dried hulls, without damaging the shells themselves.  Fortunately, the flavor and finish of this harder-nut-to-crack are good enough that growers are willing to overlook its eccentricities!

Speaking of finish, black walnuts generally should be at least 35 years old—preferably older—before they are harvested as timber.  Purdue University has developed a genetically engineered #1 cultivar which grows straighter and more rapidly than other types, making it ideal for timber plantations.  It also has the advantage of producing nuts on lateral shoots as well as vertical ones.

If you want a good crop of those, plant at least two seedlings to ensure sufficient pollination.  Choose a site which receives full sunlight and is at least 50 feet away from gardens or farm fields.  The soil should have a pH between 6.5 and 7.2 and be fertile and well-drained, but moist enough that it never dries out completely.

Set the seedlings in place in spring, whenever the ground in your zone is no longer likely to freeze deeper than 1 inch below the surface.  If you are growing the trees for their nuts, space them about 40 feet apart.  If you intend to establish a timber plantation instead, you can plant the seedlings as close as 10 to 15 feet from each other and thin out the weaker specimens as they grow, until the remaining trees are standing at least 30 feet apart at maturity.

Position the seedlings at the same depth they grew in the nursery, and remove or suppress any weeds that sprout near them.  On a timber plantation, once the saplings reach 6 to 8 feet, prune off all side branches to a point halfway up each tree.  Continue this pruning as the tree grows, being careful to cut the branches during the dormant season and before they grow larger than 2 inches in diameter.  Don’t slice them off flush with the trunk.  Rather, leave a small collar in place.

Allow saplings intended to be nut trees to branch out more, as larger crowns mean larger crops.  Once they start to fruit, their nuts will begin falling in late summer, still encased in their green hulls.  Wear gloves to protect your hands from staining as you gather them and spread them in a roofed location to dry.  The hulls eventually should become brittle enough to be removed.  Then it’s time to get cracking!

Buy GSP Black Walnut plants to get started with your tree plantation here! 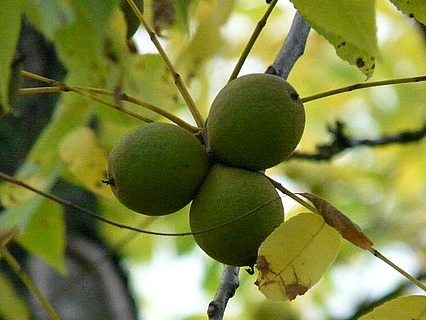